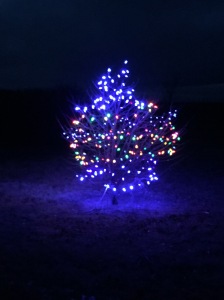 I had one of those Mondays this week…everything was going well. I was busy working at my desk, where I often gaze out the window to see what’s going on in the world. I’d just let my horse go after bringing the heifers back into the pasture. I was in a live session with a student when I realized that something didn’t look right.

Apparently the heifers, in their meeting called by the let down to the corn stalks, had decided one of them would take it in the shorts with the electric wire so they could all enjoy stuffing themselves with corn for the rest of the day. I finished up with my student and headed up to remind the lovely dears that no, they could not go back out and eat themselves sick. I mean, they had no idea about Thanksgiving, did they?

Once they were back in the pasture and I’d fixed the fence, they settled down in a heap closer to the corrals. The moon has been especially  bright this week, in the late night and early morning, so I could spy on them at midnight with the binoculars to be sure they hadn’t mutinied again.

And that’s why I HAD to put up the Christmas lights on the apple tree. That and the cordless drill, which is a story for another day.

I am a writer, runner, teacher, singer, guitar player, mom, lover, coffee drinker, hunter, antique tractor driver, horsewoman, sister, and lover of the outdoors. Did I mention that I love lighthouses?
View all posts by Sally Gerard →
This entry was posted in Uncategorized and tagged heifers and lights. Bookmark the permalink.