My brain was making a kind of a whirring noise as I thought about us just driving up to someone’s house and asking them about their property. I rolled down the window, splattered with dried spots of snow melt and squeaking as it descended, and the crisp air hit my face in a cold rush. “Don’t you think they’ll be a bit nervous if two strangers just pull in and start asking if they want to sell their tractor?”

I looked over at him, cowboy hat pulled low his forehead, because his voice sounded odd, like he was framing his words too carefully: “Well,” he drew out the word, “I guess if they come out, guns loaded, we’ll just go on to supper.” His lips pressed together hard, and the smell of the peppermint his was sucking on drifted over, but I saw a twitch in the left 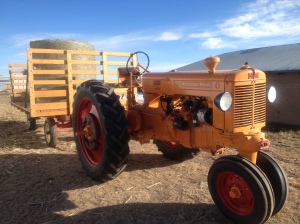 corner of his mouth.

The tires crunched on the gravel drive, the gear shift clunking into first as the chug of the diesel engine cut off. The slam of the pick-up doors led to silence and I could hear the breeze rustling the pine branches against the wood of the house. My eye was drawn to that shiny prairie gold metal, the candy apple red of the wheels muted by the bright body. Reaching out, my fingers slipped over the smooth cold surface. “Hello Beautiful,” I said to her.

I am a writer, runner, teacher, singer, guitar player, mom, lover, coffee drinker, hunter, antique tractor driver, horsewoman, sister, and lover of the outdoors. Did I mention that I love lighthouses?
View all posts by Sally Gerard →
This entry was posted in Uncategorized. Bookmark the permalink.