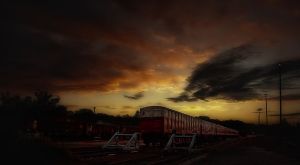 Finals. It is finals week and my freshmen just finished reading Night by Elie Wiesel. We listened to the entire novel in class read in the deep, rich voice of a narrator who pronounces everything  much better than I do. We had some good discussions, but I didn’t feel like my students understood the stark reality of Elie’s journey into night.

They answered many short constructed response questions where they had to use textual evidence to support their ideas. I was miserable grading these. They wrote a letter to Elie…we didn’t mail them. And on Monday, I gave them the preliminary work for their final, to outline an essay on this novel. They had two choices: the dehumanization of the Jewish people or they could track what happened to Elie’s faith during the novel.

This was not their idea of a final. They wanted multiple choice. They wanted true and false. They wanted word searches. They did not want to think or write or hear the words “textual evidence.” The outlines were so awful that I spent a lot of time calling parents to ask permission to keep them after school to finish the essay because they hadn’t done enough of the preliminary work to be able to write an essay in the 90-minute final period. One young man didn’t finish until 4:15, after starting at 12:30.

“Elie had this strong religion for believing in God; God was everything to him. He would

cry during his prayer because he feels that inside of him and needed the tears to pray.”

“Elie thought that if he didn’t pray, then why did he get to live, to even breathe. He thought this was a part of life, that it was necessary to pray. He needed to pray to even live.”

I am a writer, runner, teacher, singer, guitar player, mom, lover, coffee drinker, hunter, antique tractor driver, horsewoman, sister, and lover of the outdoors. Did I mention that I love lighthouses?
View all posts by Sally Gerard →
This entry was posted in Uncategorized and tagged finals. Bookmark the permalink.