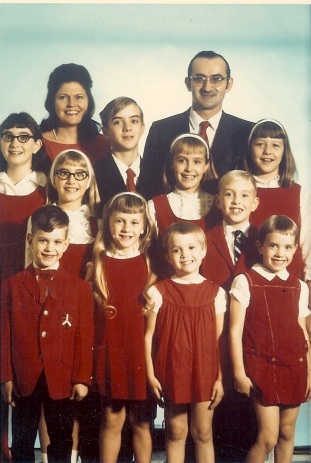 From a child’s perspective:

Once upon a time there was a little girl born with huge blue eyes and curly brown hair. She was the sixth to be born with a seventh on the way. Her mother and father loved each other beyond the mortal life, and when her mother died, shortly after her little sister was born, her father was quite lost. Alone and with seven children born out of love, her aunts and uncles stepped in to help as much as they could. Her older sisters and brothers did what they could, especially with the little ones.

As the little girl grew, she was smart and curious, but shy and quiet. She was very close to her little sister and they were always together. One day, her father married another woman and this woman had three children, so the family grew to ten children and her father adopted the three new children. The little girl continued to be close with her little sister and now with her new little brother. The three of them were always together.

But, the new wife did not like the little girl or her little sister and over time began to isolate and abuse them. She locked them in the basement and did not feed them. She locked them outside on cold winter days and did not feed them. She dug her long red nails into their scrawny arms and shook them. They were afraid of her and afraid to say anything. They huddled together in dark, cold places and tried to comfort each other.

One day, the little girl was taking her bath when the new wife grabbed her head and held it under water until she thought she would die. After that she avoided baths as best she could, trying to take them when she wasn’t at home alone with the new wife. The little girl began to live in the stories she read in books from the library—hiding in the top shelf of the linen closet with her book, a flashlight, and her notebook to write in. These worlds were so much safer and in them, everyone had enough to eat and plenty of love to share.

As time went on, her daddy must have become aware of what was happening to his little girls formed in love and he divorced the new wife, but not before she took everything she could from the home, including the little wind up teddy bear that had been such a comfort to the little girl during the long hungry nights.

The little girl was so thankful for her kind aunt and uncle who took her in with her little sister during the summer when her daddy was getting rid of the new wife. This was a magical time for they loved the little girls, fed them, took them places and they had things to play with and still shared a room together.

When they came home, the new wife was gone, but so were their sisters and brother that their daddy had adopted. They were very sad that they were gone and they didn’t even get to say goodbye. They sent tapes to each other with their voices recorded and did their best to stay in touch.

A few years passed, and their daddy found another new wife, and she had three kids too, but they were older and there was no adoption. The little girl was growing up and she just could not understand how her daddy could pick another wife. The two little girls clung together as best they could, but the little girl had to go live in another house after a while and the little sister ran away.

I’d like to tell you that in the end they did live happily ever after, but that would not be true for both of them. The little girls did come together as adults and had some very happy times, but the little sister was very scared by all that they’d been through and it was a heavy burden for her to carry, and the little girl was too, but she managed to go on and live. Maybe there will be a happy ever after sometime when they meet again in a place where new wives are not needed because the first one is always the right one and she never dies.

I am a writer, runner, teacher, singer, guitar player, mom, lover, coffee drinker, hunter, antique tractor driver, horsewoman, sister, and lover of the outdoors. Did I mention that I love lighthouses?
View all posts by Sally Gerard →
This entry was posted in Uncategorized and tagged happy-ever-after. Bookmark the permalink.