Blizzard: a severe snowstorm with high winds and low visibility. According to Accuweather.com, “In the 1870’s, an Iowa newspaper used the word “blizzard” to describe a snowstorm. Previously, the term blizzard referred to a cannon-shot or a volley of musket fire. By the 1880’s, the use of the word blizzard was used by many across the United States and 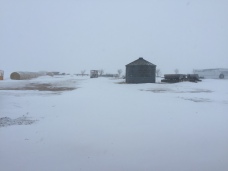 Here we woke to deep drifts from the high winds and had to shovel our way out the door to get to the stock. Of course, there are also bare patches of ground. It’s funny how your perception is way off though and you can’t tell if you’re walking into a deep drift until you

are in the middle of it. The horses are warm in the barn as we put them in last night in anticipation of the conditions. The bulls are safe in the corral and don’t seem bothered by the ice.

Students across the state of Colorado and into Nebraska are doing the snow day dance-or more likely sleeping in. I hope to get my snow shoes out if the wind dies down a bit, since I did not brave these conditions to

run this morning. I would have ended up in a drift myself. I did drive the sixty miles to school yesterday on icy, snow-packed roads, only to arrive to the message that my district would be letting students go early due to the worsening conditions. After that announcement, no one had any focus except for the snow outside. So, a day to catch up, to get some things done that I’ve had no time to do, and to make brownies I think!

I am a writer, runner, teacher, singer, guitar player, mom, lover, coffee drinker, hunter, antique tractor driver, horsewoman, sister, and lover of the outdoors. Did I mention that I love lighthouses?
View all posts by Sally Gerard →
This entry was posted in Uncategorized and tagged snow, wind. Bookmark the permalink.