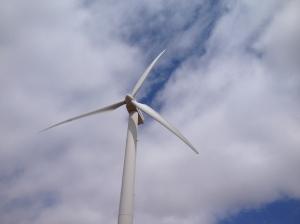 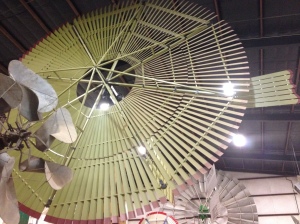 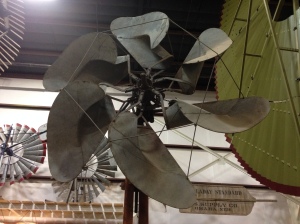 I never knew there were so many kinds of windmills, but I’ve always been fascinated by them. The first time I drove past one of those wind farms, I was struck by how those tall whitish towers looked like enormous flowers dancing in the sun, or like little girls spinning with their arms out and their faces turned up to the sun. The American Wind Power Center in Lubbock, Texas has over a hundred different windmills:

“The invention of the self governing windmill and its subsequent successful manufacture greatly influenced the development of the western two-thirds of the United States. Windmills from that period tell the story of ingenuity, hardship, success and failure of the early settlers as they applied a new technology to conditions in an environment with which they were barely familiar. Between 1854 and 1920, over seven hundred companies had manufactured tens of thousands of windmills.”

Every single one is so beautiful, from wood ones with painted scrolls to metal ones small and large. We rely on ours today to water the stock. I love to climb the windmill tower and sing at the top of my lungs into the blades as they spin, and then look out over all the world and feel the Earth spinning.